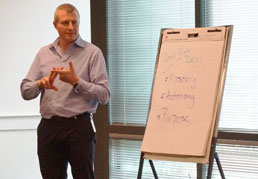 As a noted Leadership Coach and Facilitator since 1989, Tim Threipland works with clients across Asia, EMEA and the United States.

After serving in the British Army for six years as an Infantry Officer, Tim honed his skills in the world of business as a long-time Facilitator for Franklin Covey Europe. He also worked for Chay Blyth alongside his Skippers on The BT Global Challenge sailing race and with the delightful rogues on the England Rugby pitch for Clive Woodward in the build-up to the Rugby World Cup in 1999. Perhaps his most challenging, yet rewarding venture has been his recent work in education and schools.

Tim is currently Learning Experience Director for Becauz and leads an outstanding cadre of coaches globally that provide support to leaders both on a one to one, as well as team coaching basis.

With a philosophy that every voice is valuable and unlimited in its potential impact, Tim’s approach is pragmatic and principled, and focuses on enabling individuals to exercise their choices – Choices that empower and guide individuals to do what is right both for themselves and their business.

Tim lives in the UK in Oxfordshire with his lovely wife and four kids.